VRTO – one of Toronto, Canada’s largest virtual reality meetup groups, presented the January 14th 2016 supermeet featuring various presentations and panelists from the top VR companies in the city. It was a sold out event with over 120 attendees, and 15 volunteers!

The first of these presentations looked at the theme of Natural Virtual Reality Interfaces: Keeping a strong immersion & sense of presence. Dale Rosen presented his 3DUI – Three-Dimensional User Interfaces. The project consisted of a set of three 3D widgets – switch, lever and potentiometer that can be manipulated by natural hand motions using a Leap Motion mounted on the front of an Oculus DK2.

These simple 3-dimensional user interfaces can easily be embedded in any virtual environment. There was also a demo of how the virtual interface can be tied to the physical world, switching on an off an LED on an Arduino using the Leap Motion, Unity and Oculus Rift combination.

The master of ceremonies for the evening – Perry Voulgaris – hosted a panel with: 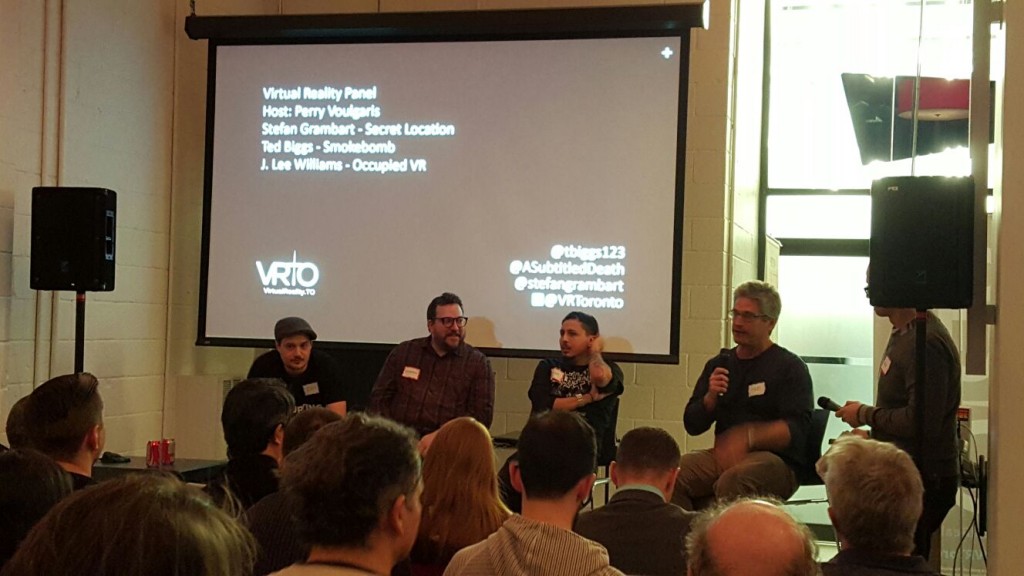 …discussing current projects, funding strategies, and a look at the tools for 2016 content creation.

The demo choices for Gear VR will include:

Oculus Rift demos will include:

She discovers the world existing in three dimensions just outside of her reach and breaks through the barrier. She explores it with wonder and curiosity which eventually erodes into confusion and fear which drives her back into the safety of her colorful simple world.

Here was the complete schedule:

VRTO will also be hosting a meetup for anyone attending VRLA Winter 2016 – January 24th in downtown Los Angeles. Stay tuned for that meetup!
Don’t forget to follow VRTO on Twitter and Instagram at@vrtoronto for around the clock updates. You can also use hashtag #vrtoronto across all social media.
Special thanks to Murray Mckercher and Brightlane.ca for facilitating the location.

Attendance is free to all VRTO Meetup Group Members. RSVP is required.

This site uses Akismet to reduce spam. Learn how your comment data is processed.