Siggraph 2017 saw a strong rally for a conference that had been struggling to find its footing in the wake of a surge of new tech and media conferences that had sprung up at every corner.

But boy, do they ever have their groove back. Siggraph 2018 – set in beautiful Vancouver – was a densely packed, uncompromising deep dive into the 5-seconds-from-now zeitgeist of media creation. It completely reversed any concern that may have arisen from the cautious mood at NAB 2018’s VR pavilion.

Out of all conferences I attend throughout North America, Siggraph by far introduces me to the most meaningful, deep, novel and significant new ideas and research in the media and tech space. There is no holdback. All in. I find that the Emerging Technology pavilion is often the most rewarding.

But I did really enjoy the Syd Mead gallery featuring his original paintings. Design. Design. Wow, what a difference a grand industrial designer/visionary can make. 

Oh and Lightform‘s AR projection mapping solution? Game-changer. Imagine crossing your house with the Haunted Mansion, Peewee’s Playhouse and lysergic acid diethylamide. It is hard to believe when you first see it in person. 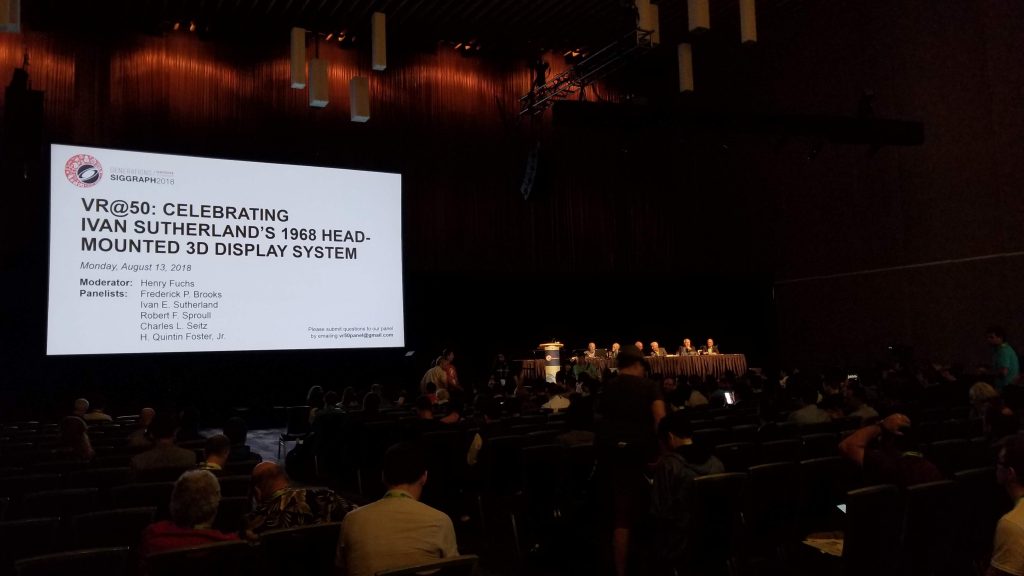 Crossing another item off my bucket list – I had the pleasure of attending a 50 year retrospective of the venerable Ivan Sutherland’s work, ideas, career – accompanied by his colleagues of 50 years who developed the Ultrasonic and Sword of Damacles. They were all very modest about their work, and I almost believed them that it was no thing, until they started breaking down the many algorithms and innovations that practically came out of thin air, and rich pedigree to manifest these complex systems.

I only wish Doug Englebart was there with them to fill in an important and significant gap. But wow, what a a lineup.

Then Google showed up with their new lightfield-capture array of GoPros – a mutation of their Jump configuration, but using wholly new ideas to render lightfield/volumetric data – to capture the lineup of All-Stars. 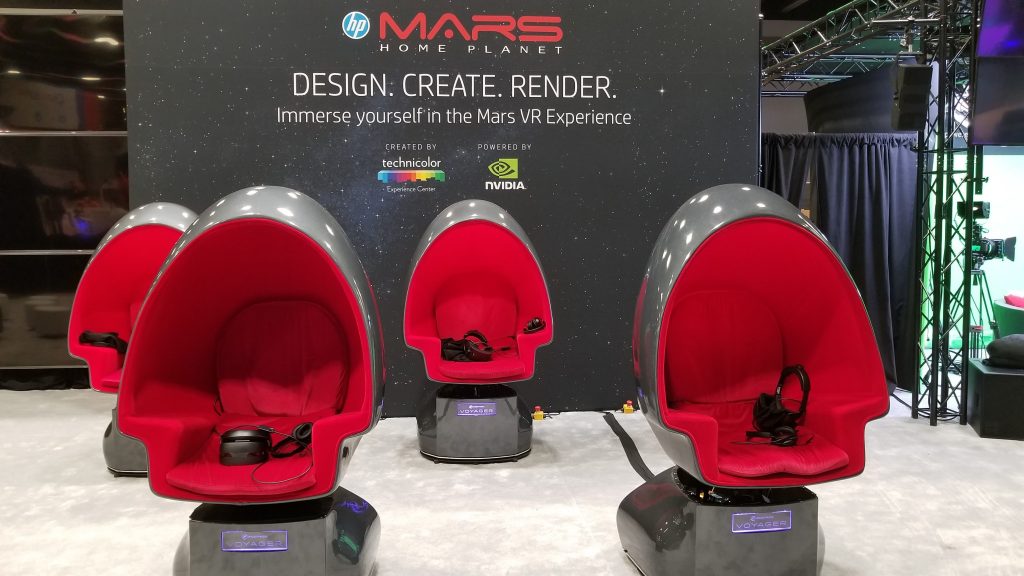 HP created a leadership initiative program that invited students, hobbyists, enthusiasts, designers, scientists and beyond to imagine Mars once it has 1 million inhabitants. Over 9000 (heh) groups submitted entries and the results were cherry picked in aggregate to form a unified fly-through of an imagined future spaceport welcoming you to the Red Planet.

Powered by the little success story that are Positron chairs, I enjoyed the 15 minute ride along red carpeted museums and Star Trek-like tunnels to survey various ships and historic fictional fragments. It was like being on Disney theme part ride at Epcot. A few dropped frames here and there surprised me, especially since we are AT the HP booth AT Siggraph, but nothing another few optimization passes couldn’t fix.

But c’mon VR community – we have to stop with the glitches and dropped frames when it is proper public showtime. No excuses.  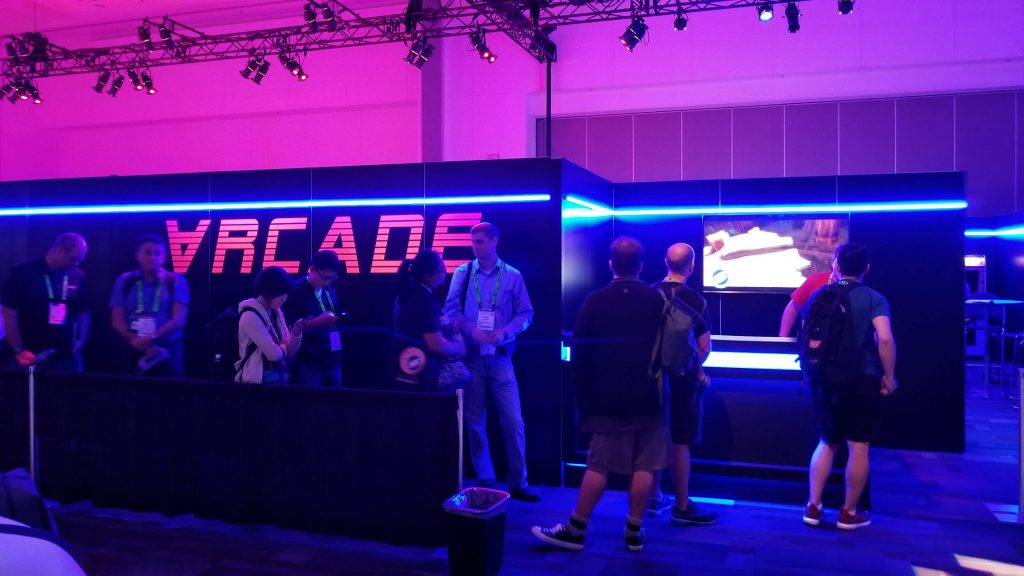 Yes there was a VR arcade and a VR Theater and even a VR museum, all of which were full and sold out all the time. They were…fine. And popular: Good pieces, many of which are currently freely available, and some of which we featured at FIVARS in previous years. 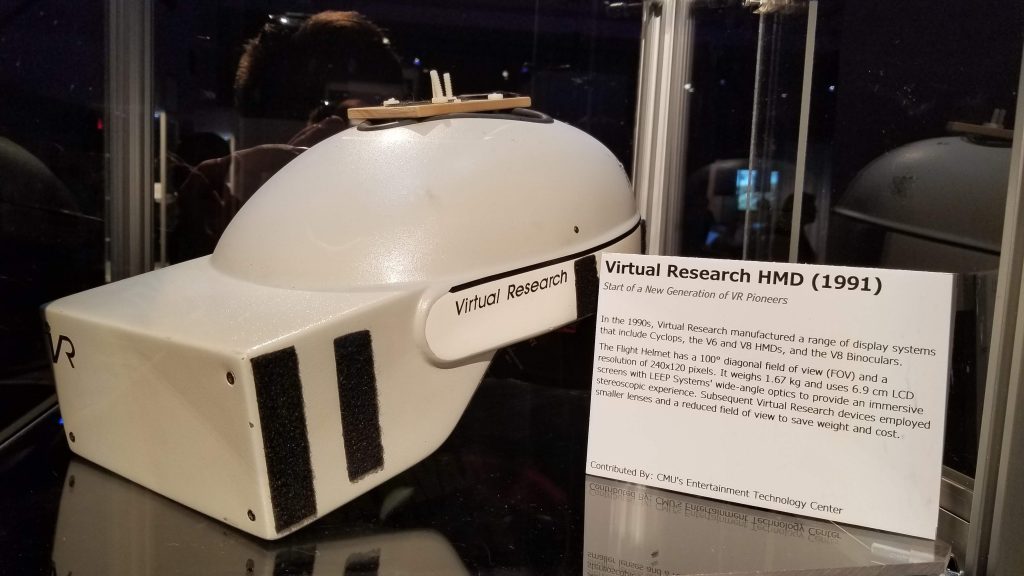 It is a reminder that only a supremely tiny portion of the population has ever had any exposure to most of these pieces and will still wait for an hour and a half, or get to the box office at 730am just to get a look. 

And when we talk about VR “games” we are talking more about interactive media, rather than a hair-raising Metroidvania-like that will have you throwing your gamepad against the cat.

Which I will use as a seque:

VR Games Are Coming into Their Own

so, as a separate packet I want to upload from my brain this week – VR games are just getting better and better. Even though some of us know that VR is going through its fourth fifth or even sixth rebirth/renaissance whatever, it is important to also remember how some things are kinda new.

Games are far richer and more visually complex than ever before, and this is exponentially amplified by the huge leaps being made in render, ray trace, AI and overall GPU technologies.

But also, we are now moving beyond the trial and error, “short quick demo of a mechanic” phase, where smaller objects, cluster with others to become more complex and evolved systems, and then those conjoin and mutate and evolve to form richer, better integrated mutlicellular experiences.

Here are some recent examples:

These are not your standard zombie shooters.

Now, with all that said, understand that we have spent a year trying to pull together a showcase of the best the Immersive media space has to offer on a global scale – so go buy your preciousFIVARS tickets and keep this thing growing.

Here are articles I thought were important from the week.