The 2017 theme is ‘Giants,’ inspired by Sir Isaac Newton’s phrase “If I have seen further, it is by standing on the shoulders of giants.” 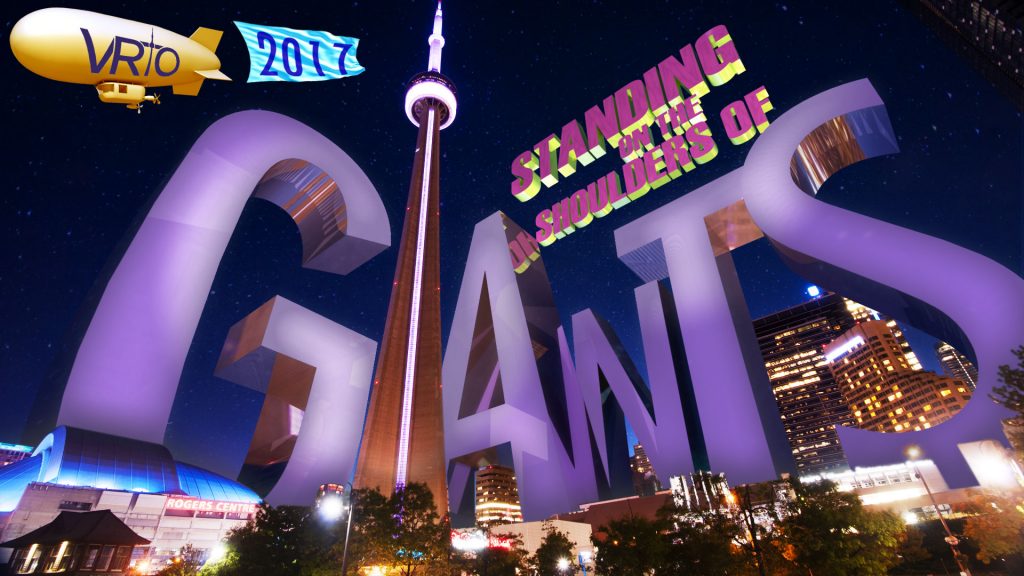 “The theme,” VRTO founder and executive director Keram Malicki-Sanchez explains, “Comes from the notion that we have decades of research and insight to unpack at such a critical, liminal moment for the culture and society, we would be remiss to not include those who have come before us in the conversation, so we can build from more than 30 years of experiments, experience, wisdom and knowledge.”

Malicki-Sanchez, who has enlisted experts in various fields of research and development to join him in building focused pavilions at this year’s unique event (including a multi-modal pavilion, one dedicated to AR art and seminars, and another exclusively to WebVR), has curated a lineup of speakers, educators, panelists and moderators that represents the real history of development in the “experiential” media arts, including David A. Smith, Graham Thomas Smith, Moses Znaimer, Vincent John Vincent, Ian Kelso, Peggy Wu, Rafael Brown, Charles Fink, Bill Perry,  David Plant,  Dr. Maria Karam, Dr. Karan Singh among many others.

Additionally, experts and change agents from across the spectrum will be presenting in various formats on subjects that include:

and so much more….

For those who don’t want to be within 50 years of computer code – VRTO will also feature an exclusive Film & TV Industry Onboarding Workshop (FTVW) that will train participants through the many stages of production and post-production for spherical aka 360-degree video.

In the Presentation rooms (CR2 and AR1), researchers and presenters from Google, Microsoft, Open Text Corporation and many other leading companies from around the world will share advice, experience, insights and post-mortems on their work and projects.

The FIVARS (Festival of International Virtual & Augmented Reality Stories) returns with a special exhibit featuring its most popular pieces since 2015 and few new premieres in advance of its September run, and the show will also feature a VR Arcade featuring world-class VR game developers and Augmented Reality Art gallery and sessions track (AR1).

VRTO strives to motivate experimentation, discovery, relationship-building and research-sharing, distribution and monetization strategies, ethics, standards and best practices, and innovation in every sense of the word. With curiosity as its fuel and actionable data as its aim, this one-of-a-kind, international symposium will support attendees in springing forward with fresh ideas and insights, and powerfully charged new conversations and relationships to make the most of this awe-inspiring and unpredictable paradigm shift.

Do not get left behind.

Get your tickets now.

*** This article is a living document and subject to frequent updates. It exists as a guide only. Please refer to the official site for schedule times, policies and documentation. ***